Yesterday (Tuesday), I woke up to see the Nikkei having closed down 11%, after having fallen 6% the day before. My first thought when I saw this, literally, was: “If I were a sector-betting kind of guy, I would plunk a lot of money into Japan right now.” As it turns out, the Nikkei was up nearly 7% overnight last night, despite the fact that global markets were down today, with Toyota, Isuzu, and Sony all up 9% or more. As I write this, Japan’s markets have just opened on Thursday (Wednesday evening our time) and have given back 2.5% of yesterday’s gain. We’ll see what the next few days hold both in terms of news about the Fukushima Dai-Ichi nuclear plant, and the markets at large.

This is a horrible, horrible situation in Japan from a humanitarian and an ecological standpoint, but with that said, markets almost always overreact on the front end of these kinds of things, with the m.o. usually being “sell first, ask questions later.” I think there’s a lot of that going on right now. When markets over-react, they tend to be like rubber bands being pulled down too far in that they usually 1) don’t break, and 2) snap back — and fairly quickly. Here’s an interesting chart form Ned Davis Research that was prepared on 9/11/01 in response to the terrorist attacks that same day. The chart looks at the reactions of the US stock market to terrible news — the Fall of France in ’40, Pearl Harbor in ’41, etc and how markets initially responded followed by their subsequent performance over 3 weeks, 9 weeks and 18 weeks. 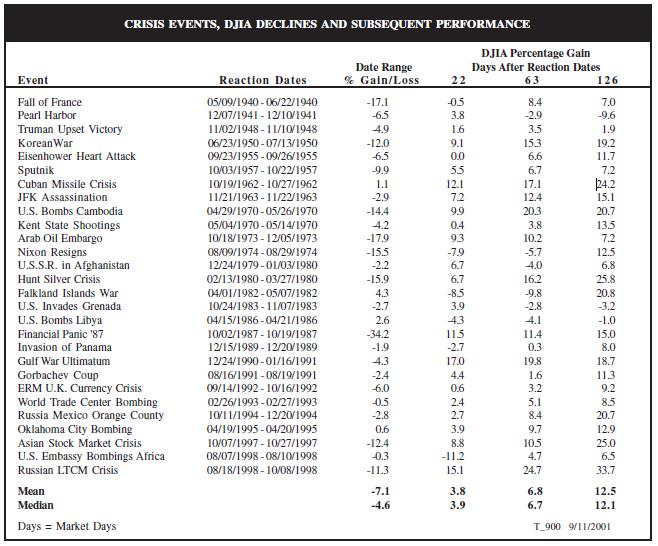 As you may recall, after 9-11, the markets dropped 20% when they opened a week after the Twin Towers fell. They, of course, fully recovered within less than two months, despite the fact that we were also in a recession at the time, huge government changes as a result of the attack were on the way, a war in Afghanistan was looming, and there was continuing anxiety over other potential attacks.

You can probably take the phrase “Worst ______ ever in history”, fill in the blank with “US hurricane disaster (Katrina)”, “nuclear event (Chernobyl)”, etc. and see the same pattern with respect to markets. My guess is that this disaster in Japan may, at least in some respects, end up being worse than Chernobyl based on how events are unfolding at the moment, and it will undoubtedly have global supply chain ramifications; however, I am less confident it will have any strongly adverse market-wide impact beyond what we’ve seen based on looking at the historical record relative to such events, at least in the intermediate-to-long term. There are undoubtedly broad economic risks associated with the situation in Japan — the impact of an extended power shortage in the third largest economy in the world, an increase in Japan’s already substantial national debt, and the potential for a reduction in the global political appetite for much-needed nuclear power. So, none of that is to say that markets won’t drop more in the next week or two as the uncertainty unfolds — they very well may, but it’s hard to know how much of that risk assessment is already built into market prices given how dire the situation looks today, and how markets will respond once the very high uncertainty of today’s situation passes, which it inevitably will.

By way of recollection for those who have put 2010 firmly behind them, last year was an particularly choppy year in the markets and financial news, with the headlines dominated by fears of financial default by five of Europe’s major economies, and of course, the dizzying May 6 “flash crash”. And yet despite those and other financial challenges, the US stock market gained 15% gain for the year, which in hindsight for most investors was worth the ride.

At some point during the unfolding of the financial crisis of 2008-2009, I commented in an email I sent to all clients that in my then 15 years in this business, I had yet to see a client step out of the market in response to a crisis, and be better off for having done so. Having been on the otherside of that crisis for two years now, that comment remains true, and I think that’s worth keeping in mind as we watch the events unfolding in Japan and their day-to-day impact on the markets.

As always, I’d be happy to talk over in more detail if that would be helpful, so please let me know if you have any questions or if there is anything I can do for you.