The 2nd quarter was mostly a positive quarter for stocks globally. The quarter started off stronger but lost some of its momentum in the latter half of May and June largely due to concerns about the possibility of the Fed raising rates at some unspecified point in the future, and a short-lived soft patch of economic data in the latter two weeks of May. 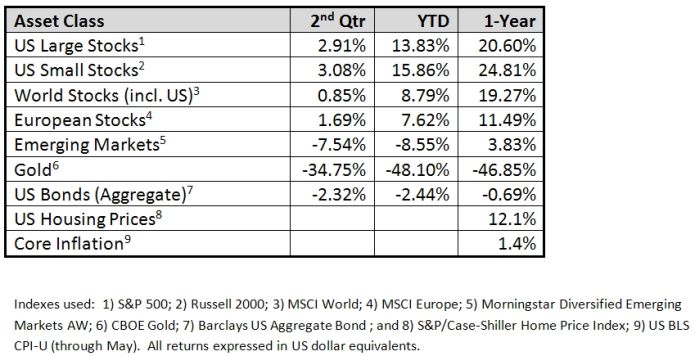 Despite a weakly positive 2nd quarter, returns for US, European and Japanese stock markets have been strongly positive over the last 6 and 12 months. Bonds, especially longer duration and lower quality holdings, took a hit this quarter with the Fed’s hint-of-a-threat of a slowdown in their own bond buying activity. Emerging markets continued to struggle despite valuations that are about one-third below US market valuations, and gold has had a horrendous 2013 so far, down 47% in the last 6 months.

The economic data continued to show signs of improvement across many quarters, and one big concern at the start of the quarter – the effect of the US government sequester on spending and economic activity – has so far turned out to have been much ado about nothing.

Investor sentiment at large continued to reflect the tendency of investors to pile into that which is hot and run for the exits at the first sign of trouble. In the first five months of the year, nearly $3.4 billion of new money rushed into high-yield bond funds, even as the yields on those bonds hit record lows (and as their prices thus went to record highs). Then in a mere 15 trading days, starting in late May, investors ran for the exits, selling $7.8 billion of those same funds, including $1.5 billion on June 7th – the largest one day exit ever for such funds – for fear of a rise in rates (and a decrease in bond values). The same underlying concern also hit equity markets with stocks falling from about 15,400 to just under 14,700 in two weeks, although that panicked sense of overreaction seems to have subsided with US markets returning to near record highs in the last two weeks. Furthermore, and perhaps reflecting an overly pessimistic world view, according to Gallup’s annual Economy and Finance survey, only 52% of Americans are invested in the stock market as of April 2013. This is the lowest number since Gallup began the survey in 1998 and 13% lower than the pre-recession high in 2007 . . . this in spite of nearly 20% or better returns in US and global markets at large over the last 12 months. I take much of this as a positive as it reflects some uncertainty and lack of confidence, and taken together, those can often help prevent or reign in excessively overoptimistic market sentiment.

Probably the most significant event of the second quarter, and perhaps one markets have been expecting for some time, was Fed chairman Ben Bernanke’s comments about the timeline for the slowing of the Fed’s bond buying / quantitative easing activities. Although he reaffirmed the Fed’s intention to keep interest rates near zero into 2015 and until the unemployment rate reaches at least 6.5%, Bernanke also suggested that if economic indicators continued to improve as they have been improving, it would be time to begin withdrawing some of the Fed-provided liquidity. Although this set markets on edge – especially bond and interest-rate sensitive markets – this is a quite reasonable expectation in my opinion. A truly recovering patient shouldn’t need supplemental oxygen and steroids forever, and on balance, a strengthening, normally functioning economy is a far better alternative to one that expects to thrive on artificially low interest rates indefinitely.

So, what might result from the Fed’s gradual withdrawal of liquidity and an eventual rise in interest rates? Economics writer Rana Foroohar recently wrote this in her June 25th Time Magazine Curious Capitalist column:

London-based Capital Economics recently looked at how major shifts in monetary policy played out in 1994 (during which time the bond market crashed) and in the early 1950s (when it didn’t). The good news is that, in their estimation, the conditions today look much more like those of the post-World War II period than those of the early 1990s. Those conditions sound a lot more like the ones that existed during the period between 1942 and 1951, when America was dealing with an event even larger than the 2008 financial crisis: World War II and its aftermath. The bond-buying program then was nearly as large as today (the Fed’s holdings reached 11% of GDP in 1945, versus 12% now, from a lower base). And it was arguably just as urgent. The 1940s version of QE was meant to keep borrowing costs low to finance the war effort. Yet despite the massive run up in the Fed’s balance sheet, things didn’t end badly. The unwinding was done in baby steps, as is the plan now, rather than all of a sudden. The Fed made it clear that it would do whatever it took to maintain “orderly conditions” in the security market (similar to Fed language today). And finally, rates were kept low long after the unwinding, not rising above 2% until 1955. Yet the lesson to take from the 1950s is that even large Federal Reserve buying sprees need not end in tears. And tapering doesn’t have to translate into a massive run-up in borrowing costs.

Of course, we don’t know exactly how well the Fed will execute on their exit strategy, but what is clear is that there has been, and will almost certainly continue to be, a great deal of thought, market sensitivity, and transparency around the strategy, and that the eventual outcome is not necessarily a bad one, as the 1940s example above illustrates.

In many areas of life, intense activity and constant monitoring of results are the path to success. However, in the investment world, such an approach is not terribly helpful, and in my 19 years of doing this, I have found most such hyper-vigilance to be counter-productive. The Chinese philosophy of Taoism has a concept of “non-doing”, or perhaps more specifically, “action without action” or “effortless doing” . . . think of a tree growing, yet without “trying”. The term for this is wu wei.

Unfortunately, as anyone who has a television or reads the news knows, much of what the financial media newsertainment complex would have us do and believe is the antithesis of wu wei . . . “rates are going up, get out”; “stocks are down! sell, sell, sell”, “Apple had a great sales report, so let’s load up on that, too”. You know the drill.

This is not to say that there aren’t things we can – and should – control . . . things like the amount of risk we take in portfolio construction, diversification, consciously choosing our portfolio’s exposure to investing factors that have been shown, over time, to add to expected portfolio returns, prudently rebalancing our portfolios at disciplined intervals, and exercising emotional discipline when markets get rocky as they inevitably do. These kinds of activities, and many others such as ongoing planning around our long term objectives, are important decisions that we should consciously and prudently make at each and every step of the way. However, that is not the media’s jobs; that is ours. Their job, of course, is to attract eyeballs and sell advertisements (too often for gold coins!).

There is hope for sanity in the world. Wu wei, baby!

I hope you’re enjoying the summer. As always, please let me know if you have any questions or if there is anything we can do for you.