The third quarter was a strong quarter for both US and international stocks, with the US stock market as measured by the S&P 500 up 5.24% for the quarter (about 19% year-to-date), and global stocks as measured by the MSCI All Cap World Index up 8.45% for the quarter (and also up 19% year-to-date) . . . and this despite the usually long list of geopolitical and economic worries that accompanied those returns: the possibility of the Fed tapering its easy money policy, the diplomatic / potential military crisis in Syria, and the start of yet another round of congressional debt ceiling brinksmanship, which as of October 1st, has resulted in a much reported on government shutdown.

Although there were decreases in the rate of improvement in housing starts and related housing activities, which were no doubt part of the Fed’s decision to remain accommodative, there were other signs of continuing improvement in the US economy, as well as the global economy at large. 80% of global PMIs (purchasing manufactures indexes) in August trended upward and point to an annualized Q3 global GDP run rate of 4%, which was even above the consensus global growth target of 3.8% for 2014. In the US, the ISM manufacturing report for September unexpectedly jumped to 56.2 from 55.7 (anything above 50 indicates expansion), foreclosure activity continued to decrease to the lowest level in over 4 years, and the most recent four week rolling average of initial jobless claims hit 305,000, its lowest level since June 2007.

Despite continuing improvements, in a sea of data and news as large as that produced by the global economy and all its commentators, one can find most anything he or she is looking for, good or bad. In August and early September, the concerns centered mostly on Syria and the many major market meltdowns that have occurred in Septembers past; this month, the debt ceiling debate and its possible ripple effects seem to be the fear narrative du jour. However, despite those worries, September turned out to be a good month in both US and global markets, up 3.14% and 5.40%, respectively for the month.

Five years ago last month (on September 15th), Lehman Brothers filed for the largest bankruptcy in US history. For anyone brave enough to revisit the last five years, here is link to a short history of those five years in 73 headlines, starting with Lehman’s collapse — http://bit.ly/16rOgHi

Despite some of the horrific headlines – which included double-digit unemployment, an endless stream of housing foreclosures, the possibility of a Eurozone collapse, the loss of the US’ AAA credit rating, and even talk of another Great Depression – five years later, the Dow Jones Industrial Average was up 43% on a price-only basis, and up 62% if you include dividends. The rocky ride notwithstanding, it was not a horrible five years in the end for those who saw it through.

The US Government Shutdown

As I write this on October 1st, the US government has been partially shut down due to ongoing budget wrangling in Congress. Although this is getting wall-to-wall news coverage at the moment (and with any luck will be over by the time you read this), here are a few things to know about such shutdowns, past and present:

So, how have stocks fared during previous shutdowns?

Bottom Line: None of what’s going on DC is likely to have any lasting effect, so I would just do my best to just ignore the whole thing, including any short-term adverse effect it might have on the markets.

Is There a Basis for a Reasonably Optimistic Outlook?

About a month ago, in a conversation with a long standing client – and one who, despite all of the market anxieties we have lived through together over the last 20 years, has managed to stay firmly seated and not made any catastrophic behavioral mistakes himself – raised what I thought was a very worthwhile question: Is there a basis for remaining reasonably optimistic in spite of the deafening drumbeat of economic and political negativity that is so pervasive everywhere we turn?

To such a question I would posit two historical observations:

Of course, as this same client has observed, there can be no certainty that past is prologue. However, that noted, the underlying principal of economic growth and development remains likely unchanged in direction, if not magnitude. Just as the arrow of time moves only forward, so it is likely to be with long-term economic growth and the trajectory of those businesses that fuel and fully participate in that growth. Those businesses are what we own, in your portfolio and mine, and along with those businesses, we also own a share of their future prospects for innovation and growth. However, to see those gains manifested may require the patience and perspective of 5, perhaps 10, years – but a timeframe still well within the bounds of a retirement or even half of a retirement.

My Wife, the White Knuckle Flyer (or Deep Risk vs. Shallow Risk)

I’m a fairly frequent flyer, as is my wife, Mary. Having been together since 1981, we’ve been on a lot of flights together. Like all flyers, we periodically experience the occasional bout of unexpected turbulence while in the air, which in our many years of flying together has never caused any significant issues other than perhaps a spilled drink. Yet despite that fact, it is not an uncommon response for her to grasp either my arm or the armrest with a strength of grip usually only seen in those hanging from a high rise window, holding on for dear life.

However, this relatively routine occurrence made me curious about how often turbulence does result in serious injury, death or damage to a plane and so I went looking. The US Travel Association tells us that in 2012 alone, there were a little over 2 billion airline person-trips, and yet according to the National Transportation Safety Board (NTSB), since 1981 – the year my wife and I met – there have been only three deaths and 76 serious injuries resulting from turbulence. These almost always involved flight attendants or passengers not wearing a seat belt. There was only one reported instance of any significant damage to a plane, and that over 15 years ago. Almost never is turbulence the cause of a plane crash or of any lasting consequence to those passengers who stay seated and belted in.

Now, there a couple of things that are likely to increase your risk of being hurt in a bout of turbulence: one would be taking your seatbelt off and/or running around the cabin during a period of such turbulence; another would be trying to get off the plane mid-flight before it has safely landed. (That would probably also get you restrained in your seat with zip ties!) Both of these scenarios are obviously premised on not staying seated with your seatbelt safely fastened.

This, of course, is also true in the investing world. Broadly speaking, there are two kinds of risks investors face: deep risk and shallow risk. Deep risks are those that are likely to cause permanent loss of capital, and as author and polymath Bill Bernstein points out in his Investing for Adults series, these four horsemen of the apocalypse are Confiscation, Devastation, Deflation and Inflation. Without getting too far into the weeds here, for our purposes, it will suffice to say that Inflation is by far the greatest of these deep risks that any of us is likely to face in our lifetimes, even over a period as short as one’s retirement. During the course of a 25- or 30-year retirement, if history is any guide, we can expect the price of almost everything we need to double, slicing in half the value of a cash (and probably bond) portfolio or a fixed income such as a pension. This is not just a “very likely” kind of thing; if history is any guide at all, it is a virtual certainty. This would truly be a deep risk. 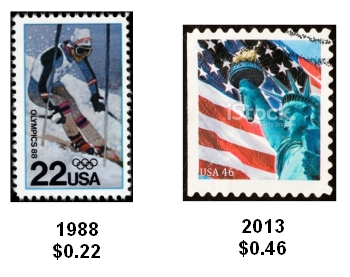 Shallow risk, on the other hand, is much more transient. This is the risk of market fluctuation in a relatively short period of time . . . weeks, months, even a few years in some cases. Such shallow risks may be the usual 10% downward fluctuations we see from time to time, or the more horrifying, but ultimately temporary, 55% drop in stock values we saw in the late 2007 – early 2009 timeframe. It would include the 2011 budget crisis and the threat of US debt default, and perhaps even any fluctuation that might lay ahead with the budget showdown we’re in the middle of as I write this.

There is obviously a parallel here: too often, the nervous flyer assumes that there is some correlation between normal turbulence and the risk of a catastrophic plane crash, when in reality there isn’t much if any such correlation. The same applies with the relationship between the totally normal and temporary fluctuations of the market (shallow risk) and the permanent loss of capital (deep risk) in well diversified portfolios . . . and that is to say that there isn’t much if any of a relationship between the two. The fluctuations we see in broadly diversified global portfolios – even the more dramatic ones like the 2007-2009 event – have always been transient and, like the turbulence we periodically experience in flight, aren’t likely to cause any permanent damage to those who remain in their seats with seatbelts fastened . . . and perhaps more importantly, while such portfolios are subject to significant shallow risk, they are likely to be the best hedge against the much longer term and infinitely more corrosive deep risk of inflation.

Something to keep in mind as we watch the budget showdown unfold, and whatever other worries the headlines in the days ahead may present to us.