The US stock market had a good – but not great year – in 2014. Despite having hit a new record high on 53 occasions during the year, the Dow Jones Industrial Average finished up only 10% for the year – not bad, but not a noteworthy year in any respect other than its having eked out 53 new highs during the process. However, despite the decent returns from US large companies, most other equity categories did not fare as well.

Here’s a short table showing the 2014 market results around the world [1]: 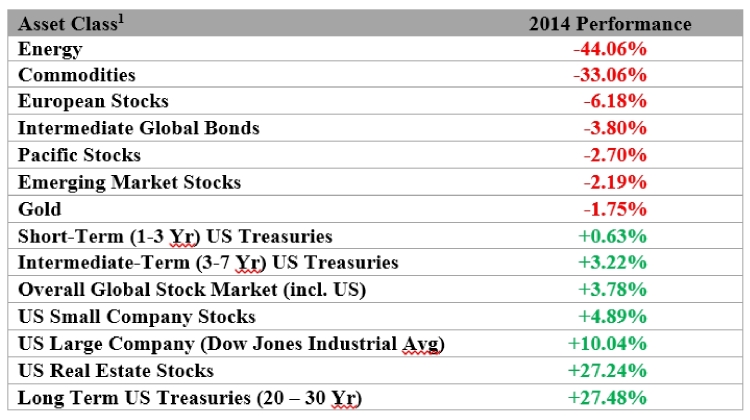 The first thing to notice is that only three categories had substantial returns to speak of: US Large Company stocks at 10% and then US Real Estate and US Long Term Treasuries[2], both at about 27% for the year. Over the last quarter or so, a question I have heard more than once from clients has been something along the lines of, “If the Dow is setting records every week, why isn’t my portfolio?”

There are a few parts to the answer:

So, the short answer is that US large company stocks did reasonably well, but poor international stock performance offset much of those returns, and bond returns further dragged down performance.

For what it’s worth, the funds we typically use in most client portfolios kept pace, and in several cases, outperformed their respective benchmarks. For example, the two US large company funds we use, the DFA US Large Company[4] and DFA US Large Value funds, posted returns of 14.5% and 10.91%, respectively, both beating the Dow in the process. The DFA US Real Estate fund also outperformed its benchmark, the Dow Jones US Real Estate Index, 33% to 27%.

Why Hold Internationals at All?

If internationals have performed so poorly of late, why hold them at all? The most compelling reason is diversification, which is a tacit acknowledgement that, despite how well any particular asset class has done in the past – recently or otherwise, we don’t have any idea which ones will do well in the future. So, yes, US stocks have outperformed internationals over the last year – and the last few years, but if you look back long enough, you’ll see that that hasn’t always been the case. Over the last 15 years, for example, five of the six international funds we use have outperformed the S&P 500 by between 1.5% and 6% per year, and most of that outperformance came from 2003 – 2007, when international markets surprised many after several years before that of relatively weak performance. For clients who have been with us that long, it’s quite likely that without internationals in the portfolio 15 years ago, there would have been a lot less money in the pot at the start of 2014.

The recent outperformance of the US is analogous to a few other times I can recall: the meteoric rise of technology stocks in the late 1990s; the run-up of gold in the early 2000s; the overheated energy sector in 2008 when oil hit $145/barrel; and the strong performance of bonds in 2008-9 when stocks were crashing. If you’re inclined to ask, “Why don’t I put more/all of my money in the US market today?”, it might be worth asking what the results would have been had we followed that line of reasoning in the past: What if I had put all/more of my money in tech stocks in 1999? What if I had invested more heavily in energy in 2007-2008? What if I had sold my stocks when they had plummeted and bought the better performing bonds instead? In hindsight, the answers are generally clear and obvious, but it’s easy to lose that perspective in the heat of a hot market (or at least one that’s hot, relatively speaking, compared to almost everything else on the planet.)

Finally, one other comment on internationals: I know that some will think – and perhaps understandably: Will those other countries ever get their act together? And why should I wait for their substandard stock market returns while I wait for them to get it together – especially the more socialistically leaning ones? It’s a fair question, but surprisingly, there is surprisingly little evidence that a country’s economic performance or its political leanings have much effect on its stock market performance. To wit, take a look at the table below of stock market returns for various countries from 1971 – mid-2014: 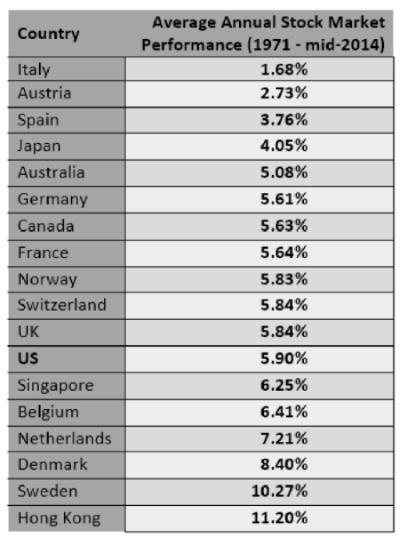 As I look at this chart, I have a few thoughts:

The point of all of this is, of course, is not that these particular countries will outperform the US market going forward (although they may); the real point is that we’re often surprised by the performance of both countries and / or investment categories and, even with the benefit of hindsight, it’s not always clear which one will be or would have been the clear winner, political turmoil and policies notwithstanding.

Finally, take a look at the following chart, which shows the major asset classes and their performance year-to-year over the last 15 years. (The chart hasn’t been updated for 2014 yet, thus the 2013 endpoint.) For each year, the asset category boxes are ranked from best performing at the top to worst performing at the bottom. I’ve drawn a red line through the S&P 500 and have highlighted in a green box around every occurrence where one of the two included international categories (International Large and Emerging Markets) have outperformed the S&P 500. With this visual, it’s very easy to see that US stocks and, specifically, US large stocks, aren’t always the best game in town. (Apologies for the slight blurriness of the image.)

None of this means that next year will be the year of the international stock fund. It may or may not be, and betting too heavily on any one asset category or country – especially when it’s as expensive and popular as the US market is right now – is usually an ill-advised strategy. For most clients somewhere in the neighborhood of 50% to 60% of their equity holdings are in the US market – US large, US small and US real estate included – and in my opinion, that’s enough chips for most people to have on one number. However, if this is something you’d like to talk over in more detail as it pertains to your specific situation, I’d be more than happy to do so. Just let me know.

In the meantime, I wish you a very Happy New Year and hope it’s a year filled with health, happiness and prosperity . . . and, as always, please let us know if there is anything we can do for you.

[2] While US stocks are expensive, bonds – especially long term bonds – are at the tail end of a 30 year bond bull market and are exorbitantly priced by any historical measure. While the returns this year were very attractive, l believe the primary role of bonds in a balanced portfolio is stabilization against the inherent volatility of equities. Long term bonds, especially at current prices given low interest rates, are not in any way defensive at this point and when rates rise, as they inevitably will, there is likely to be a bloodletting in long bonds, which would largely defeat their defensive purpose. Remember the old adage, “Anything that can go up 27% in a year . . .”, and while that’s expected in an equity portfolio and the reward has been commensurate, very few would expect that kind of volatility from bonds, even long Treasuries.