Stocks in developed markets around the globe had a mildly negative first quarter, and we saw a significant pickup in volatility compared to that which we’ve seen in the last two years. It was the first negative quarter in US markets since 2015, although the one bright spot was emerging market stocks, which saw a slight increase. Although global markets—the US included—fell by 1% to 2%, the quarter felt worse than that as markets started very strong with a 7% gain by the last week of January, followed by a 9% drop through the rest of the quarter. And, of course, the media’s breathless reporting of it all on a moment-by-moment basis no doubt made it feel yet worse for anyone who was too closely tuned-in.

None of this should come as a shock to any investor with an adult memory.  Temporary dips of 10% happen about once a year, and bear markets (a dip of 20%) happen about one in every three or four years.  More to point, as much as one can ever say “we were due for something like this”, we really were.  Prior to last quarter, we had experienced an unusual lull in market volatility—and all the volatility we had experienced over the last two years had been in the upward direction.  Would that it always be so easy!

As for the proximal cause of this newfound volatility and slight market dip, there were several factors at play.  Stock valuations—especially in the US—have been running on the high side for some time, and I think most investors had been expecting something to happen at some point, even if the timing is never known.  Then, we saw the first signs of inflation, which is generally not a portfolio-helper as higher inflation portends higher interest rates, and most financial asset portfolios don’t respond well—at least initially—to the expectation of higher interest rates.

And, of course, there was the threat of a US-initiated tariff war, initially targeting steel and aluminum imports from China.  While this sounds like it might be a good thing for the steel and aluminum manufacturers here in the US, if you interview most of the economists out there, almost all will tell you that tariffs are a poor tool at best, and are generally destructive to everyone else’s overall economic well-being, ours included.  As quarter two starts, the next volley in that battle has been already fired, and it appears that both President Trump and China are digging in their heels.  For an amusing 15-second commentary on a true tariff war’s effect on the economy, see this link: https://goo.gl/YKVmi4   I literally laughed out loud.  For now, let’s hope the Trump tariff plans are only an opening gambit to drive negotiation and not an actual long-term strategy.

Finally, the recent tech sector woes have added to the other drags on the market’s performance.  Facebook stock has been hit hard by revelations of totally inadequate privacy controls in light of Cambridge Analytica’s misuse of illicitly gotten personal information from 50 million Facebook users.  That, along with Donald Trump’s Twitter-bombing of Amazon, have pulled down tech stocks, many of which are major constituents of the S&P 500.

Below is a more graphical look at Q1’s world market performance and some of the news that drove that performance. 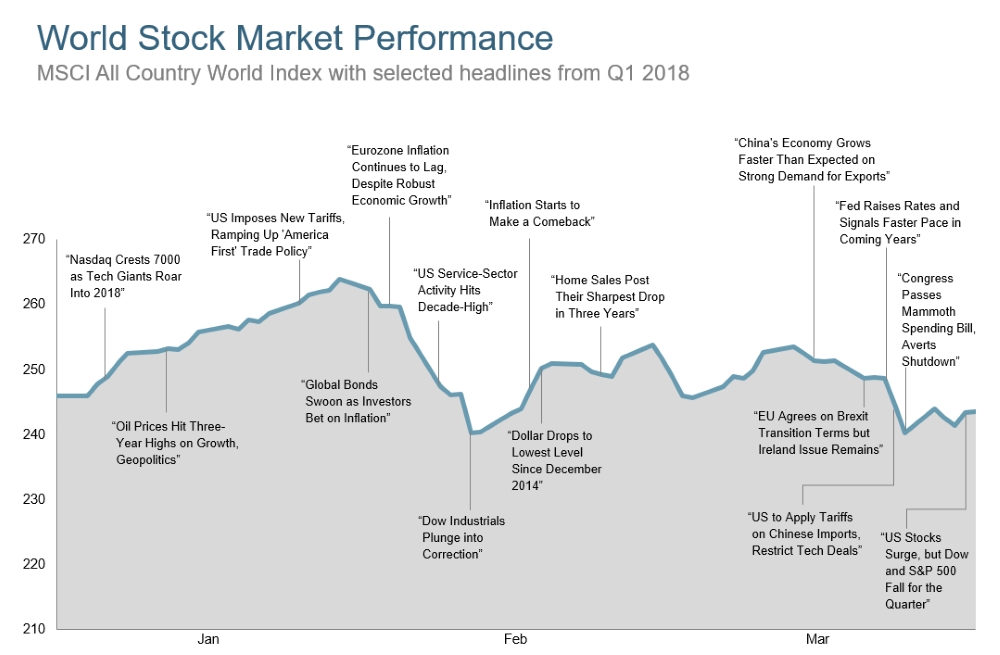 Of course, all this added volatility and the sharp drop over the last eight weeks of the quarter has unnerved some investors and, as is typically the case, garnered more than its fair share of media attention.  That acknowledged, there really is nothing unusual here in what we’ve seen in the market’s performance of late.  There are always some threats—real or perceived—that markets face.  Historically, and with few exceptions, the headlines of this week, this month, this year, have faded into the background as problems are resolved and individuals and companies go about their business.  And, as the din of news—positive and negative—goes on and on, the great companies of world, the ones we own in our portfolios, find new ways to improve efficiency, create more value for consumers, and we as owners get to share in those gains.  Same as it ever was.  (Bonus for other 80’s music lovers…here’s a link to the classic 1980 Talking Head music video, Once in a Lifetime, which features the most memorable use I’m aware of of that phrase: https://goo.gl/H9mdET)

I hope that spring is off to a good start for you and that you’re looking forward, as I am, to some sustained spring-like weather.  As always, please don’t hesitate to reach out if you have any questions, or if there is anything we can do for you.

P.S.  Here is an interesting historical note:  In March 2000, the tech-stock laden NASDAQ index reached its all-time high of 5132.  By the end of its spectacular crash from then until October 2002, it would eventually bottom out at 1108, a nearly 80% loss.  Not until July of last year(!) would we see the NASDAQ best its March 2000 high.  However, when factoring in inflation, it was not until this January 17th, nearly 18 years after its original high watermark, that it would reach 7300 and provide the same purchasing power it had in 2000.