Markets in the U.S. and internationally developed countries were relatively flat in the third quarter. U.S. large cap holdings were up a modest 1.16%, while international developed markets dipped by a modest 0.93%. Emerging markets stocks were sharply negative, down 4.25%. Bonds, both domestic and international, outpaced stocks with quarterly returns of 2.27% and 2.83%, respectively. 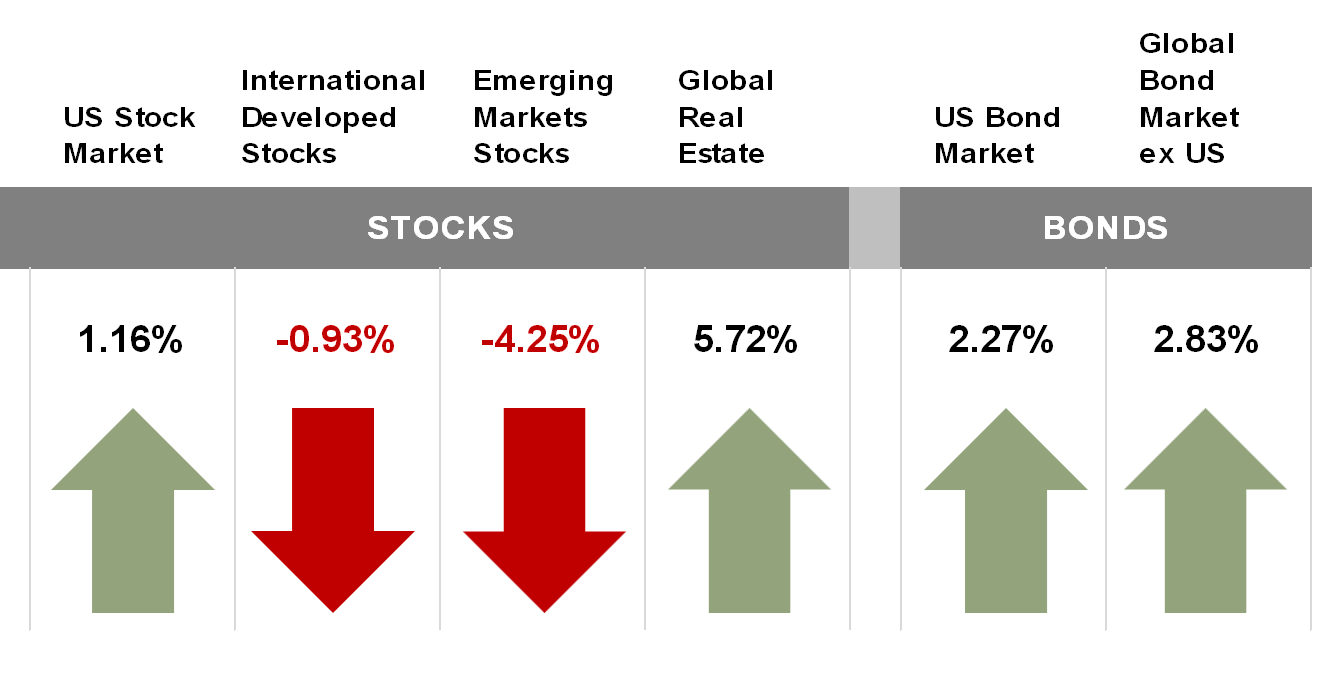 Concerns over a global slowdown in economic activity and the possibility of a recession, largely sparked by continuing trade tensions between the U.S. and China, weighed on markets around the globe. Some of these worries showed up again in the Treasury yield curve in late August, with the 10-Year Treasury rate briefly dipping below that of the 2-year note. Such an inversion has historically been a fairly reliable harbinger of recession but it’s worth remembering that such an inversion is a marker of economic concerns and not a causative. However, when a recession has followed a yield curve inversion, the typical lag time between inversion and recessionary onset has been 22 months, with stocks, on average, posting strong returns for the first 18 months of that waiting period, according to data from Credit Suisse. Furthermore, a July paper by noted finance academics Eugene Fama (from the University of Chicago and the 2013 Nobel prize winner) and Kenneth French of Dartmouth showed that stocks generally outperformed treasury bills in the 1-, 3-, and 5-year periods following an inversion, although dipping sharply on average at somewhere around the 18-month mark. More to point, several policy makers — including New York Federal Reserve president John Williams and former Fed chair Janet Yellen — have pointed out that there are enough differences in today’s economy and interest rate environment (e.g., very low unemployment and negative yields throughout much of the world) that the recent yield curve inversion may be less meaningful than in inversions past. Said simply, a yield curve inversion would not be a good market timing indicator to bet your chips on.

None of that, however, precludes the possibility of a global slowdown or even an eventual recession. World trade in goods is now expected to expand by only 1.2% during 2019, down from an earlier estimate of 2.6% This would make 2019 the weakest year since 2009, when global trade plunged by nearly 13% in the midst of the Great Financial Crisis. Note that there’s a lot of space between a positive 1.2% projection for this year and the negative 13% seen in 2009, and “slowdown” does not necessarily mean “recession”. And, it’s worth remembering that recessions are not the end of the world. We’ve seen 12 recessions since the start of 1945, or about one every six years. Not quite as common as dirt, but pretty common.

As I’m sure will be unsurprising to anyone who has been paying attention to the news, the largest contributor to the market uncertainty and the slowdown in global economic activity is the ongoing trade war between the U.S. and China. It’s hard to put an exact number on the costs, but as of May, it was estimated that the average U.S. household would see $831 per year in additional hard costs, and the number will surely be higher given the new tariffs put in place since May and those scheduled but not yet implemented. In addition to reducing consumer spending on other goods, the follow-on impacts of such costs include lower discretionary spending in other categories (and therefore a slowdown in those industries), fewer exports, anticipated job losses due to those reductions in discretionary spending and exports, and a broadscale reduction in overall economic activity due to an increased sense of economic uncertainty.

Adding to the noise, we now have the drumbeat of impeachment proceedings against President Trump. Without stepping into the quagmire that is American politics, it’s probably worth a short comment on that topic with respect to what such proceedings might mean for markets. Of course, the real answer is, who really knows? However, we have two analogs in the modern era: the impeachment proceedings against former presidents Richard Nixon and Bill Clinton. The market did fall during and after the proceedings against Nixon and continued to fall following his resignation. However, stocks had already been in free fall prior to impeachment, at that point down 23% from their early 1973 high, and the US economy was already mired in a deep recession, largely brought on by the Arab oil embargo of the early 1970s. In the case of Bill Clinton’s 1998 impeachment by the House (and his subsequent acquittal by the Senate), markets didn’t bat an eye and continued on their merry way until eventually meeting the buzz saw that was the the popping of the dot com bubble in early 2000.

That’s not much history, and two data points do not make a reliable sample size. However, with respect to the current proceedings, the market didn’t really seem to pay much attention on the day of or after recent House impeachment inquiry was announced. In my mind, there are three reasons why impeachment — whether you’re for or against such an effort —may have a limited impact on markets.

Reason 1: Markets rocketed sharply upward in the 14 months following Donald Trump’s election, with the S&P 500 adding 36% during that initial honeymoon stretch, but returns have been meager since. Looking back over the last 21 months, the S&P 500 has added only an additional 2%, dividends included. This may in part be a recognition that the market, fueled by excessive optimism, overshot itself during those first 14 months following the election, but another factor may be that President Trump has sacrificed some of the early economic gains with aggressive trade tactics that have not worked as easily as he might have expected. For this reason, the market may be a bit agnostic to impeachment’s effect on economic activity and market performance.

Reason 2: Should Trump survive the impeachment effort, which at the moment, seems more likely than not, and assuming he would seek reelection, I believe there is the possibility, if not the likelihood, that he’d feel compelled — at least temporarily — to dial back the aggressive tariff approach to the trade negotiations. While I realize Donald Trump has never been one to back down from a fight, the political reality of an election year economy may very well moderate that tendency.

Reason 3: Regardless of the inquiry’s outcome, it’s not clear there will be a material economic impact. Should Trump be impeached by the House and acquitted by the Senate, as Bill Clinton was, in the end, there will have been much ado, but to no great effect economically. On the other hand, in the unlikely event (unlikely at least based on the current proclamations by many in the Senate) the Republican-controlled Senate were to convict, Vice President Mike Pence would assume the office, presumably continuing many of the same policies, although perhaps with a less aggressive approach to our trade relationships. In any of these cases, it’s not clear that the outcomes would be any more adverse to economic activity and markets at large than the current reality.

Of course, the larger question many investors are asking is this: Given the economic and political news of the day, is there something different I should be doing with my portfolio? The answer is almost certainly not, at least not based on the news itself. While market volatility can occur at any time, and 20% market dips happen about one in every five years (recall the market’s 20% drop during the fourth quarter of last year and its sharp recovery this spring), betting one’s retirement portfolio — one presumably structured for the duration of a 20 or 30 year retirement — on the news of the day (especially the news of these days), would seem foolhardy. While such news can and does drive volatility, it’s also unlikely to change the fundamental and historic trajectory of economic activity and what has been the market’s inexorable rise over time. Ten years ago, we were still in the dark shadow of largest economic downturn since the 1930s and yet here we are, the Dow now 85% higher than it was before the financial crisis had started, and 300% higher than it was at the worst of that crisis. And during those 10 years, we’ve lived through a possible Grexit, a still potential Brexit, the temporary downgrade of US sovereign debt, three 20% (or near-20% market dips), and a political environment as volatile and divisive as any I’ve seen in my lifetime. And so, unless something significant has changed in a client’s specific financial situation or in their fundamental sense of risk tolerance, the evidence of history would suggest that we’re best served by keeping our eyes on the distant shore and not the news of the moment that always has and always will rock the boat along its way.

As always, please let us know if there is anything we can help with. It’s good to see some fall-like weather finally arrive in Colorado, and I hope you’re enjoy the same wherever this finds you.

A quick addendum, and I hesitate to even include due to its short-term nature, but will anyway: Over the last several years, the runaway horse in global markets has been US large cap growth stocks (think the S&P 500 or the Dow Jones), and this has made it a painful time to be a diversified investor. This has not always been the case. To wit, look at the seven years from 2000 through 2007, where the S&P 500 badly trailed just about everything else on the planet. However, since the financial crisis, and especially over the last 18 months, the S&P has outpaced most other categories: international stocks, U.S. small caps, and U.S. value stocks. There will always be some horse that’s outrunning all the others, and of late, that horse has been large cap U.S. growth stocks. However, in the last month or so, we’ve seen something we haven’t seen in quite some time: namely, U.S. large cap growth stocks trailing just about everything else. During this admittedly short stretch, all of the aforementioned competitors have beaten the S&P 500: U.S. small caps by between 2% and 4%; Developed market internationals by between 2% and 3%; Emerging markets by 1% to 2%, and U.S. value stocks also by 1% to 2%. While I’m hesitant to draw a line from a single point on a page, we haven’t seen this in quite some time, so it will be interesting to see if this the start of a real trend.

To review the third quarter's market performance in charts, please click on the image below. Will open as a PDF in a separate window. 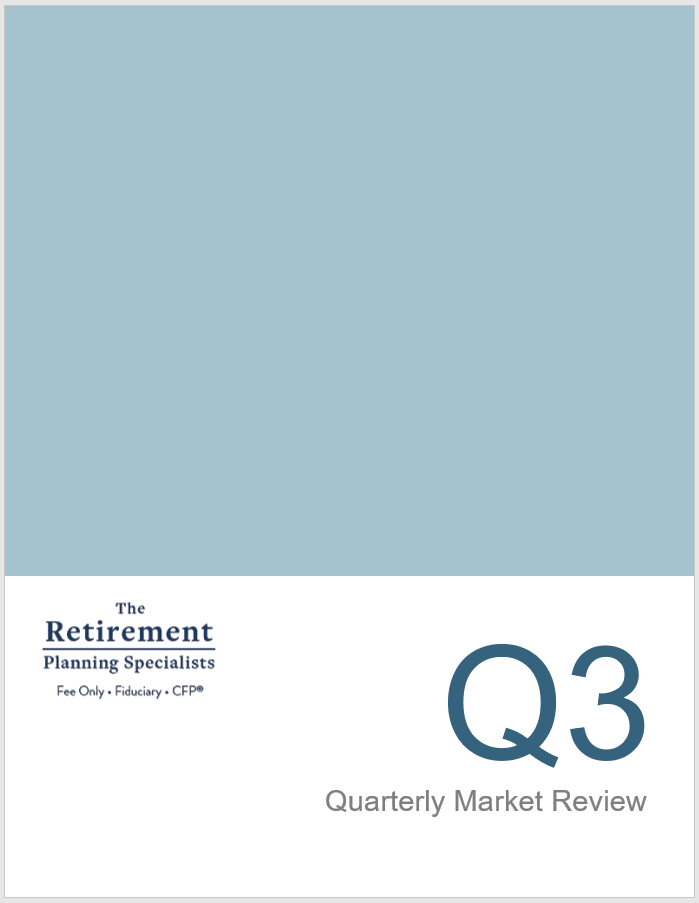