2019 was a great year for almost every investment asset class around the globe. Stocks, bonds, real estate, and gold all had strong years, with most equity asset classes up more than 15%. Several, including US large caps and some of the international asset classes, were up more than 20%. Even bonds bested the low expectations most investors reasonably held at the start of the year. Of course, the stage had been set by the painful fourth quarter of 2018. At this time last year, CNBC’s homepage proclaimed, “US stocks post worst year in a decade as stocks fall 6%.” The Wall Street Journal led the year with an equally pessimistic headline, and many investors were bracing themselves for a continuation of 2018’s pain. Things looked and felt quite scary, but those who stayed the course were amply rewarded. 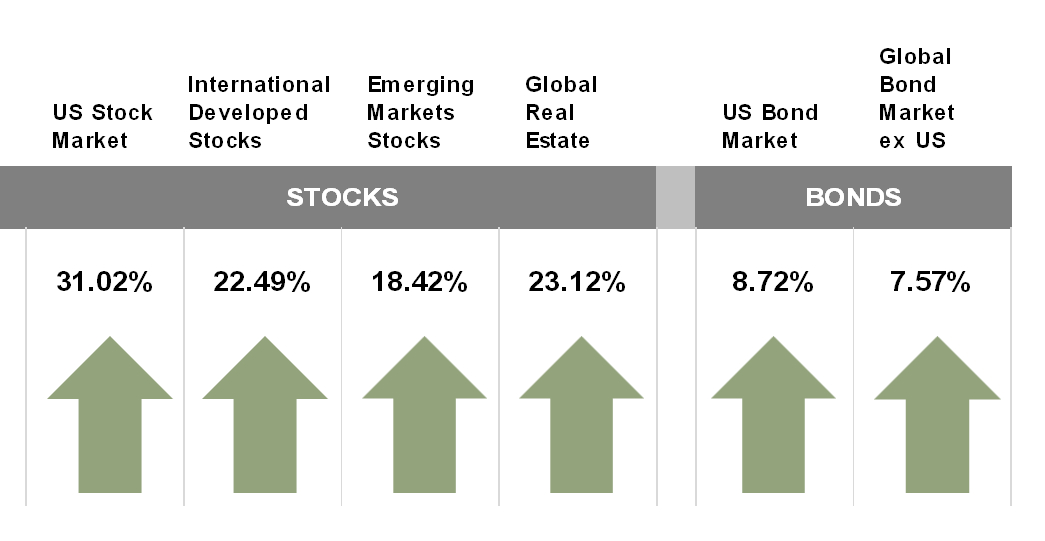 In many ways, last year’s market performance paralleled the entire decade’s: just as the painful last months of 2018 set the stage for a great 2019, the painful last years of the 2000s set the stage for the great 2010s. The 2008-9 financial crisis had punished stocks at the end of that decade, leaving the S&P 500 with a negative return for the decade. And yet, that tumultuous stretch set the stage for the ensuing 2010s, which was a strong decade for stocks across the globe, especially here in the U.S. If there is one lesson to take away from both 2019 and the entirety of the last decade, it’s this: what happened last week, last month, or last year tells us very little about what lies ahead. Said another way, where we’ve been isn’t necessarily where we’re going.

Another important lesson to take from the last decade: diversification pays off, even if it’s sometimes painful. It would have been very easy at the outset of 2010 to have looked back at the prior decade’s cumulative loss of 9% in the S&P 500 and said, “I’ll just stick with international and US small cap stocks. That seems to be where the action is.” However, as we all now know, that would have been a mistake. Despite its abysmal showing in the 2000s, the S&P turned out to be among the best asset classes on the planet in the 2010s. Those who maintained a diversified portfolio, one that included U.S. large caps, were well-rewarded last decade, just as investors who maintained holdings in international and U.S. small cap stocks during the 2000s, despite those investments having underperformed during the 90s, were amply rewarded. Betting what next year’s or next decade’s hot asset class will be is speculative, at best, and the likely outcome is missing out on the free-lunch, regret-reducing benefits that diversification offers. 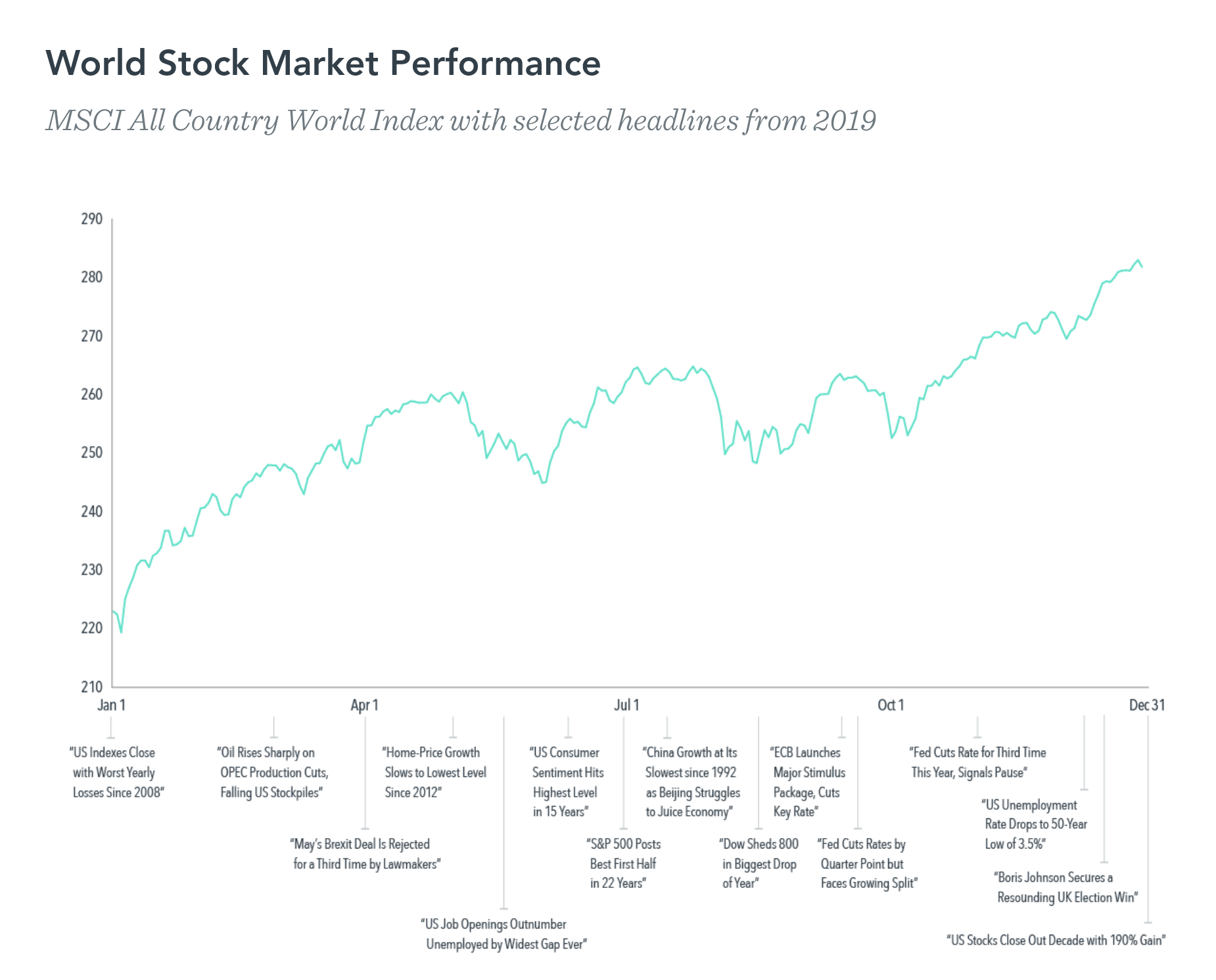 Last year also reminded us that even though markets can be volatile and scary, as they were in late 2018, stocks have generally rewarded long-term, patient investors. Over the last year, investors faced a continual wall of worry: a U.S. trade war on multiple fronts, political uncertainty around the globe (Brexit, anyone?), a looming impeachment, and the list goes on. And, during the first nine years of the decade, the list was even longer: a 10% 36-minute flash crash in 2010, Standard and Poor’s downgrade of U.S. government debt, worries about the possibility of post-quantitative easing hyperinflation, and a combination of negative interest rates and anemic growth around much of the globe. Yet in spite of the never-ending stream of things to worry about, the ongoing enterprises of the world somehow managed—as they tirelessly endeavor to do—to improve their offerings, increase their profits, and in the process, reward the investors who own their shares.

And, finally, one last lesson: don’t make the mistake of mixing politics and investment decisions. In late 2008, there were many who wanted to exit the markets due to that year’s election results, just as there were many who wanted to exit the markets after the 2016 election. Regardless of one’s politics, it is now clear that both of these decisions would have been terribly costly. And so, as we steel ourselves for the din of yet another presidential election year, it is worth keeping in mind that, historically speaking, politics and investment decisions have not made good bedfellows. Regardless of November’s election outcome, at least 35% of the electorate is going to be terribly disappointed. If by chance the results are not to your liking, I’d generally advise against compounding your misery by trying to trade on that disappointment.

All in all, 2019 and the decade which it capped were great periods in which to have been a long-term, goal-focused investor. Not all years, or even all decades, will be so kind, but it’s nice when they do come along. Here’s to hoping for more of the same in 2020! I hope the year is off to a good start for you and that 2020 is a year of health, happiness, and prosperity. If there is anything we can do for you, please don’t hesitate to reach out. That’s what we’re here for. 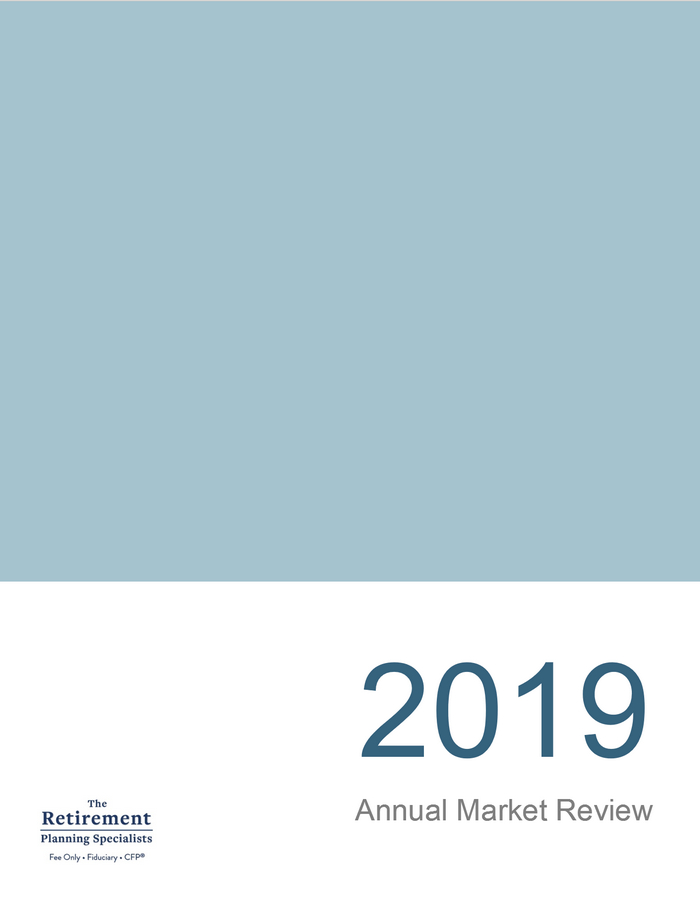