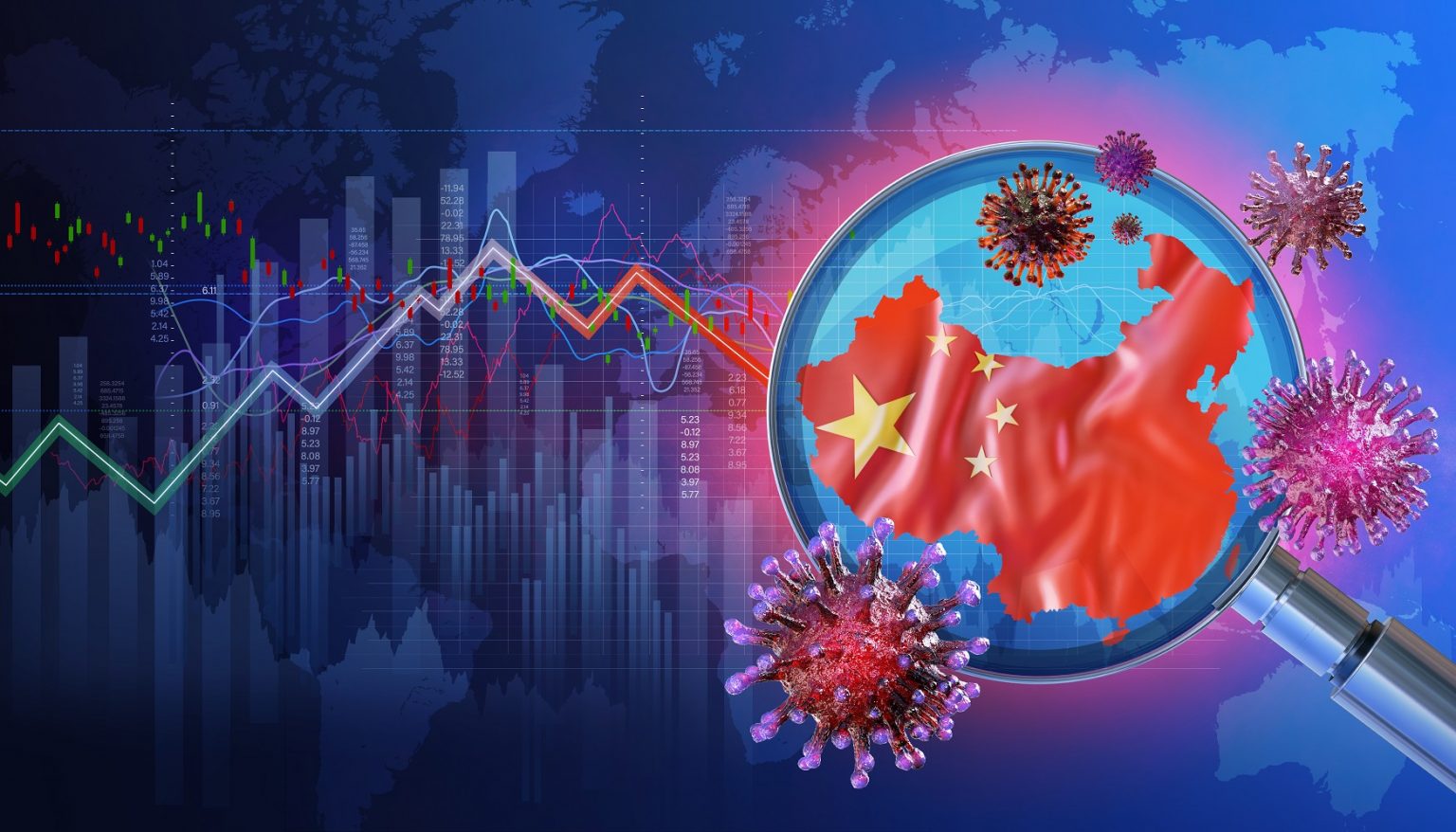 As I’m sure nearly everyone on the planet now knows, it would appear we are on the verge of a novel coronavirus (nCV) / COVID-19 pandemic. While the word pandemic is a scary one, this won’t be the first pandemic the world has faced, although most of the prior pandemics have been influenza-related, with the worst in modern times being the 1918 “Spanish flu.” This year’s is not an influenza strain, but rather a particularly virulent and easily spread form of the corona virus. Although statistics vary a bit on the case fatality rate, some estimates put it in the 2% to 3% range. While it appears that the fatality rate is very high (upwards of 4%) in the Hubei province, no doubt due in part to the lack of critical care facilities, the rate seems to be considerably lower (0.7%) in other Chinese provinces and more developed countries. This is still much higher than typical influenza, which has a fatality rate closer to 0.1%. Like the flu, the virus disproportionately impacts the elderly and those with other pre-existing complications.

While this is unfolding as a potentially significant human tragedy—and I in no way want to diminish the most important human aspects of this situation, recent events are clearly having an economic impact as well. As I write this on Friday, the DJIA has been off by as much as 16% from its recent high. A dip of this size is not unusual at all as the average intra-year S&P 500 market dip is 13.8%. The ferocity of this dip, is, however, quite striking, just as early 2018’s was. It’s worth remembering, though, that when uncertainty reigns supreme, markets tend to shoot first, ask questions later, and we’ve seen a lot of that this week. Markets of all kinds tend to overact, and for evidence of this, I point you no further than your average Denver grocery store the day before a moderate snow storm (which often, by the way, has a storm-of-the-century feel to it). 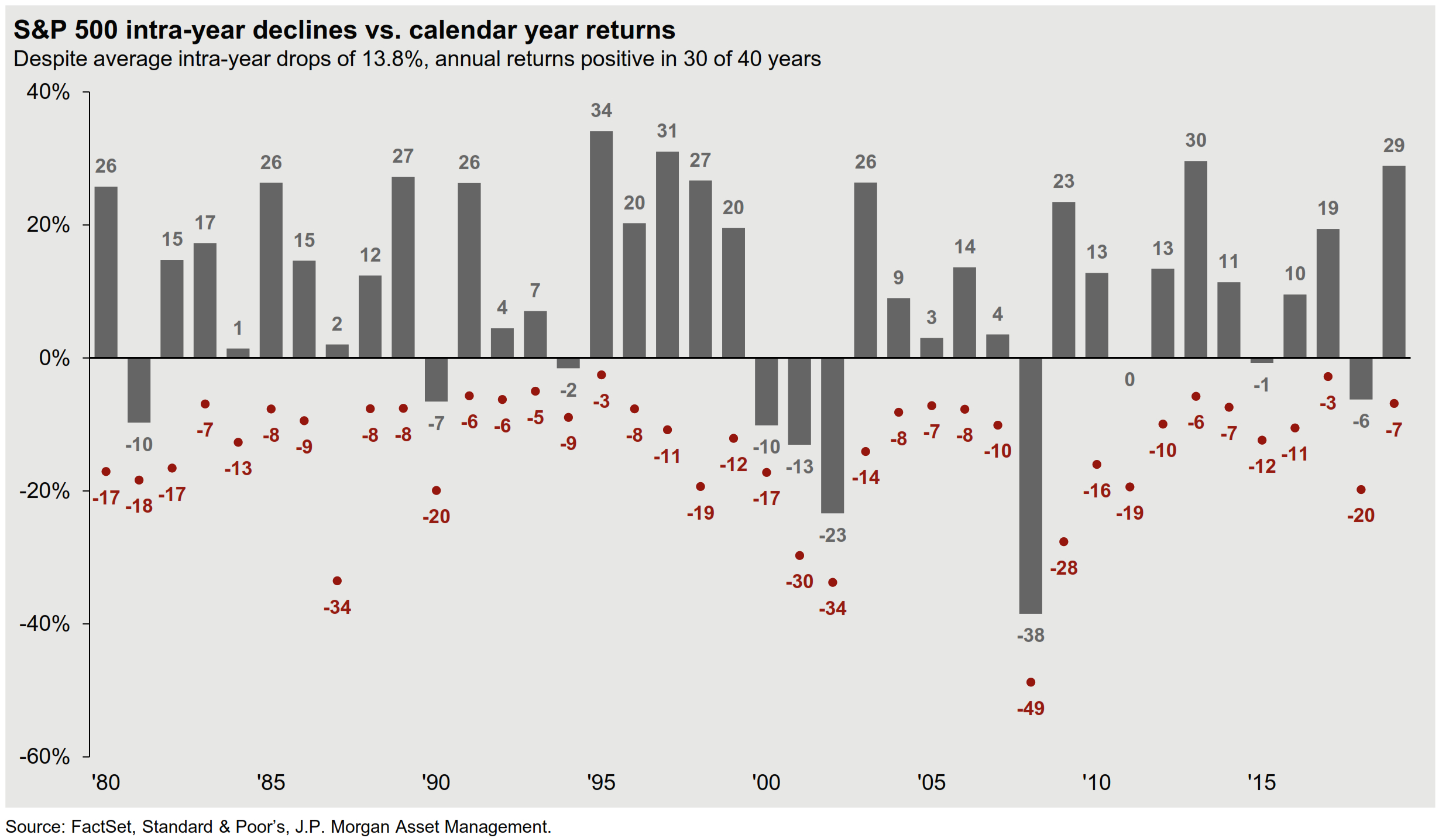 Before I jump into some of the specifics, I want to point out the general pattern of nearly all such market “catastrophes.” It goes something like this: One day, the planet is spinning on its axis, and all is right in the world. Stocks have been inching their way upwards, always with some worry of course about what may come, but in general, life is good. Those previously scarred by prior market downturns are feeling optimistic and are “all-in” on equities. And then, perhaps out of nowhere (cue the foreboding music), some hitherto unexpected piece of news introduces previously forgotten uncertainty into the picture.

What might this worrisome piece of news be? It could be a downgrade in US government debt or concerns about a housing and credit crisis; a 9/11 or perhaps or some heretofore unknown virus circulating among us, as we saw with the much more deadly SARS and MERS viruses. At first, it’s a “developing story,” and markets watch warily, while the earth continues spinning on its axis. But then, as new information becomes available and the story develops further, the threat looms larger, at which point, it captures our real attention, and the predictions and the questions start: Will I ever be able to fly again? Is the U.S. safe from terrorists? Now that U.S. debt has been downgraded, will interest rates soar? Am I going to die? More importantly, will the Honda plant in Ohio be able to get the car seat from Japan that depends on that fabric from China? What does this mean for my portfolio? And then the earth wobbles, and we see what we’re seeing this week: indiscriminate selling—dare I say panic—in the face of increasing uncertainty. In other words, a normal human reaction.

Sometimes this panic peters out quickly. New information becomes available; things aren’t as dire as we feared; cooler heads prevail and markets stabilize, quickly recovering, and in the process, making their way to new high ground. But other times, the story continues to develop, and not for the better: the tech crash-driven market downturn of 2000 to mid-2001 is further piledriven into the ground by the unexpected events of 9/11. Concerns about credit issues in 2006 that started out slowly with hopes of a quick resolution turn into a quagmire of inter-connected global debt, with people losing their homes and not just their third no-equity rental property. Markets drop 15%, then 30%, finally bottoming only after they’ve dropped 55%.

But, despite the pain of all of these events large or small, what has been the ultimate outcome historically? In every prior such event, the answer for the patient and well-diversified investor has been an eventual recovery—and often a much quicker one than anyone could have imagined. Some pain and misery along the way, but no real financial loss for those who stayed put.

The overarching trajectory of all of these stories is boringly familiar, although the changing year-to-year, crisis-to-crisis details never fail to rivet our attention. We are beholden to our fear of uncertainty and our evolutionary need to know how it all ends. Well, not to spoil the story, but the ending is always the same, at least from a market perspective. The details and the characters may change, but the narrative arc and ending do not. Markets will do what they always do, which is go up and then down, and then up again, but the world isn’t ending, economically or otherwise.

Onto the specifics of this particular story…

Again, none of the aforementioned in any way is to diminish the human tragedy that may / will unfold with all of this, and it may be an at-scale tragedy. However, I think it’s worth trying to separate the human tragedy of this, which may be substantial and permanent, from the economic toll, which will almost certainly be substantial but temporary.

Please feel free to reach out to me or Michael if you have any questions or would like to discuss further. In the meantime, stay healthy and don't hesitate to let us know if there is anything we can help with.

P.S. As an interesting aside, I’ve received more calls or emails this week about putting money into the market than about any other topic.