Print 🖨 PDF 📄 eBook 📱
If you'd like to skip the commentary and just review the quarterly market performance in charts, click here.  A link will open as a PDF in a separate window.

The second quarter was an exceptionally positive one, with markets here in the U.S. and around the globe rebounding sharply from their March lows. Nearly every major asset class across the globe was positive, bonds weakly so, equities dramatically. 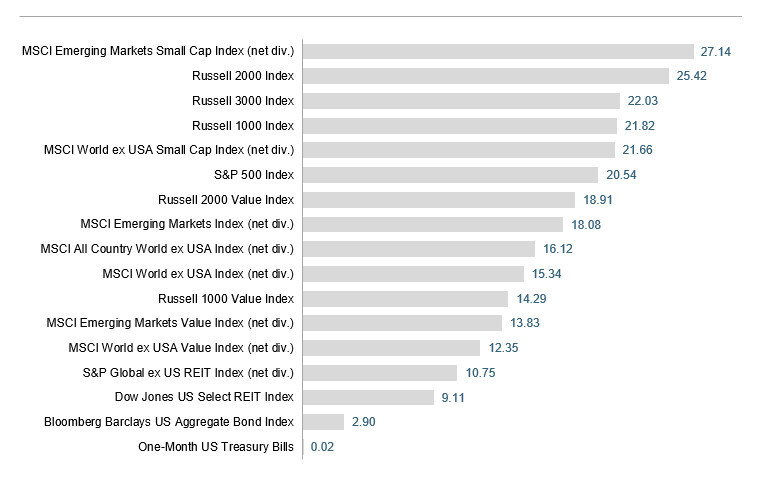 While markets finished a bit lower at the end of June than they were at the beginning, this still made the second quarter the best one in U.S. markets since 1987. From mid-February through June, we saw the fastest 30% decline in market history, followed by the fastest ever 50-day increase. Broad international and emerging stock markets weren’t far behind. Bond returns were decent, if not modest by comparison, but they did their important job well, when we needed them to, during the ugly first quarter. The Nasdaq deserves a special mention: since the market peaked in February, the tech-heavy index is up 4% from its pre-crisis high, while the Dow Jones is still down about 12%. This illustrates what has been a painful investing truth that has been so for some time now: namely, that the largest and most expensive stocks, especially here in the U.S., have also been the hot ticket to own.[1]

The February-to-March downturn, fueled by near panic, was almost matched, but in reverse, by April and May’s perhaps overly optimistic expectation of a V-shaped recovery. That expectation was supported less by actual good news than by news that was just less bad than many had feared. It was also supported by positive trends in the coronavirus’ trajectory and a lot of federal stimulus. So, while the current economic situation remains dim by almost any historical measure, it appears to be improving, and most economists, including John Williams, head of the Federal Reserve’s Bank of New York, think we have likely seen the worst of the economic news.

The following table from FT Portfolios provides a worthwhile look at some key high-frequency economic data here in the U.S. 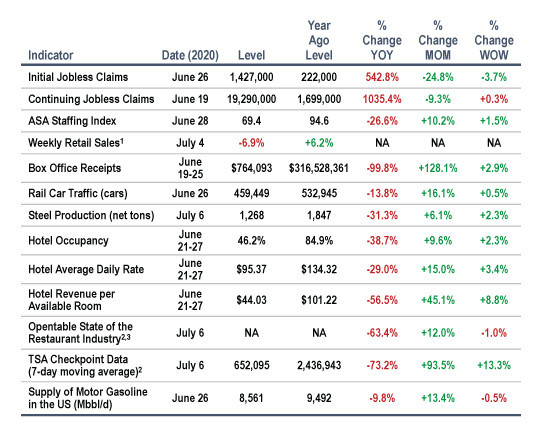 Not reflected in the table is that total nonfarm payroll employment rose by 4.8 million in June, with the unemployment rate declining to 11.1% from May’s 13.3%. The 4.8 million payroll number was much better than the 3.1 million consensus expectations for newly added jobs. The April and May employment numbers were also revised upwards 90,000 from their prior reported estimates.

While output and employment are up sharply over the last month or two, they remain far below their pre-pandemic levels. Continuing jobless claims are 11 times higher than they were a year ago! Most of this data will continue to be well below trendline for some time as it will unfortunately take years, not months, to dig out of the economic hole we find ourselves in. This was also the case in the aftermath of 2008-9’s financial crisis. Keep in mind that the market may recover much more quickly than the economy does, as we’re already seeing.

To support the nascent recovery, the Federal Reserve has indicated it plans to hold short-term interest rates near zero well into 2022. As I noted above, the injection of liquidity by the Fed, along with fiscal stimulus from Congress and the Administration, has played an outsized role in the market’s rebound. The Fed’s actions have pushed rates, including those that can be earned on interest-bearing investments, to record lows and have made other, riskier alternatives look more attractive by comparison. For example, the 10-year Treasury is currently yielding 0.7%, while the dividend yield on the S&P 500 is nearly three times as high at 1.9%. As they say, it’s hard to fight the Fed!

While stocks, on average, are within about 10% of their February highs, it is not likely we will see a full and sustainable market recovery until broader economic data and corporate profits are on a path back to their longer term trendline. And, as Fed Chairman Jerome Powell has noted, “That path is extraordinarily uncertain and will depend in large part on our success in containing the virus. A full recovery is unlikely until people are confident that it is safe to reengage in a broad range of activities.”

So, watch the Fed, but more importantly, keep an eye on the trajectory of the virus and the epidemiological data…and on the state of medical- and vaccine-related developments that have the ability to impact both in positive ways.

While there has been some media discussion of what we are now seeing being a second wave here in the U.S., several commentators have made a fair point: the uptick in cases across the country looks less like a second wave and more like the continuation of the first wave — just now occurring in states that had not previously seen a material number of cases. I noted in my June commentary that the newly reported cases in Texas, Arizona, and Florida were trending the wrong way. Unfortunately, that continues to be the case, and this trend is now more widespread than just in those three states: sixteen states have reported a record number of cases in the last month. Nationally, hospitalizations are up 40% from their mid-June lows, having gone from about 28,000 to 40,000, and ICU bed utilization continues to rise, nearing capacity in a couple of the hardest hit states. The 7-day trailing average of positive tests, a more informative number than sheer case counts, has also gone the wrong way, now at 7.8%, up from 4.4% in mid-June.

However, one encouraging, although complicated, data point is coronavirus-related deaths. This number continues to trend downward both as an absolute number (despite presently rising case counts) and as a percentage-of-confirmed cases. It’s hard to know what to make of this number because there are several variables in the equation that muddle the picture: increased testing, perhaps catching more mild cases; a younger age cohort being infected, bringing down the fatality rate; better care as doctors learn more about the disease and treatment regimens improve, and perhaps better shielding of the oldest and most-at-risk populations.

So, while deaths have encouragingly been trending down, cases and the positive testing rate in many states have been going up. And, with those upward trends, we are seeing a clear divergence in the trajectories of economic activity between hotspot states like AZ, TX, and FL and other states where the virus remains under control (think the Northeast). Restaurant and other spending data in these hotspots show them not just leveling off economically, but outright contracting, staunching what looked to be a burgeoning V-shaped recovery and bending it into a much more worrisome W-shape.

All of this illustrates too well Jerome Powell’s point, which I’ll repeat here: “A full recovery is unlikely until people are confident that it is safe to reengage in a broad range of activities.”

So, where does this leave us as we look forward?

With respect to the COVID-19 pandemic, I think about the future of the economic landscape in two phases. Phase 1: between now and the time we have an on-the-ground, widely available and being-deployed effective vaccine (or in the absence of that, a highly effective treatment protocol which significantly reduces the case fatality rate and eliminates the worst of outcomes for those that survive)[2]; and Phase 2: the ongoing recovery of economic activity from that point forward, until we reach something approaching the pre-COVID trendline.

Of course, no one knows how all of this will play out or its timing, but I think it’s safe to say that Phase 1 will largely be driven by human behavior, with respect to both the spread (or containment) of the virus and concomitant economic activity. At some level, these two things are opposed to each other: more economic activity may precipitate increased viral spread, although there is much economic activity that can be carried on safely, even if socially distanced and/or masked. It remains to be seen how much we, in the aggregate, learn from what we’ve seen in the states that were hit hardest initially — especially the northeastern states — and from those in the south and southwest that are being hit hardest now. Ultimately, this phase will be a muddle-through affair, and an unpredictable one at that. Although news on the vaccine front continues to be encouraging, no one really knows how long it will take, and the muddling will be more or less painful in all measures to the degree we learn from (or fail to) the lessons of those states that are further along. And, don’t be surprised if markets continue to be volatile, including an ugly stretch or two, until we can see clearly to the other side of this.

Barring other unpredictable events, I imagine Phase 2, whenever it arrives, looks a lot like the period following the 2008-2009 financial crisis. That is to say, a gradual ongoing rebuilding of what was lost economically, perhaps with a sharper uptick in economic activity as the impediment of viral fear recedes into the background. However, worth a reminder is something I have written before: long-term market prices are clearly tied to economic activity (which is slow to change), but their trajectory in the short- and intermediate term is much more closely tied to the economic outlook (which can change in an instant). And so, while it is worth keeping an eye on where we are today (still in a deep trough of economic activity), it will be much more helpful to look beyond this trough and keep our eyes fixed on the good news that the next six to eighteen months will hopefully bring with them.

As always, we appreciate the confidence you place in us and the opportunity to be of service. If there is anything we can do for you, please don’t hesitate to let us know.

2. There is another much less palatable way to reach the end of Phase 1 in the absence of an effective vaccine or highly effective treatment regimen: achieving so-called herd immunity through broad, population-wide exposure, but that would come at a terrible cost in terms of life lost and suffering and, I’m sure, is not the path anyone is wishing for.