Print 🖨 PDF 📄 eBook 📱
If you'd like to skip the commentary and just review the quarterly market performance in charts, click here.  A link will open as a PDF in a separate window.

Stock markets across the globe posted positive returns for the third quarter, despite September being the first negative month since March. Broad market performance ranged from about 1% for international value stocks to almost 12% for emerging markets small cap stocks. The S&P 500 gained 9% — led again by a handful of technology stocks that have captured the imagination of investors, while US high-quality intermediate-term bonds gained about 1%. In August, stocks briefly reclaimed their previous all-time high, officially ending the shortest bear market on record, but they drifted back below their February highwater mark by quarter’s end. With that roundtrip from highwater mark to highwater mark complete, we can now say we have seen the entire movie, and it ended just as it always has, although more quickly than anyone might have imagined.

During September, we also saw many asset classes outperform US large-cap stocks for the first time in quite a while. Bonds, international large and small-cap stocks, US large value stocks, and emerging market stocks all beat the S&P 500 for the month. In part, this was due to the relatively expensive[1] S&P 500 being dragged down by its heavy exposure to a handful of tech stocks, many of which fell sharply during the last month of the quarter. Additionally, September’s market performance reflected rising concerns over US election issues and worries that Congress may not pass another stimulus bill before the election. Adding further to market worries was a sharp uptick in COVID-19 cases in places that had not had large prior outbreaks (e.g., Wisconsin and Utah) or that had previously beaten back the spread (e.g., France and Spain). Nonetheless, despite these concerns and the market retracing in September some of its July and August gains, the quarter was still a net positive for investors.

The drop in economic activity during the second quarter was the largest such drop since the Great Depression. GDP fell 10%, for an annualized rate of almost 32%.[2][3] However, based on the July and August data we have seen so far, the third quarter rebound looks to be equally eye-popping. Even without September’s data, industrial production will likely be up almost 40% and retail sales up more than 25% from the prior quarter lows. With housing starts up more than 200% (who would have thought?) and private-sector employment hours worked also up more than 25%, the Atlanta Federal Reserve predicts a Q3 GDP growth rate of 32%.

This doesn’t mean there won’t be some continuing economic pain. A 32% recovery after a 32% contraction still leaves the economy in a big hole that will take at least a couple of years to climb out of — and probably longer if we assume “recovery” means getting back to the pre-COVID growth trend line. And, given the uptick in recent COVID case counts, there is the possibility, if not likelihood, of some slowdown in the rate of economic recovery as we move into winter.

These realizations have led several clients to ask, “How can the stock market be doing so well if unemployment is still so high and so much economic activity remains depressed?” It’s a fair question. As I’ve written previously, markets have tended to focus less on current economic activity and more on where the economy is headed and how it will get there. In this situation, markets seem to be most focused on economic stimulus, low interest rates, and the forward-looking economic outlook. There is reason to be encouraged on all of these fronts despite the political dysfunction we have come to expect from Washington. It is certainly in the political interest of both parties’ incumbents to get another stimulus deal done. Fed Chairman Jerome Powell continues to signal his commitment to low interest rates and an accommodative monetary policy. And, there is reason to expect that, even with the resurgence of the virus, a possible slowdown in winter economic activity would be less severe than this spring’s for two reasons: 1) increased confidence in consumers and workers being out-and-about given more widespread mask-wearing and improving outcomes for those who do contract the virus, and 2) what looks to be a much-reduced political appetite for widespread shutdowns given how severe the economic consequences have been to date. Ultimately, it’s reasonable to expect the recovery to continue, although perhaps at a slower rate than we saw in the third quarter.

And, Then the Election

In all six of the prior presidential election cycles of my career, there have been clients who have raised concerns about what they perceive to be an existential threat to capitalism or the continued functioning of the republic should candidate X win. This has been true without fail. I have also had one or two clients in every cycle who have made some change to their portfolio on the assumption that should the other party’s candidate win, the outcome would undoubtedly be catastrophic for their portfolio. Not once in my almost 27 years of doing this have I seen that work out well for a client. So, my advice on this matter is as follows: do not allow your political inclinations to impact your portfolio decisions. Anecdotal experience aside, there is also much data to support this more broadly.

One specific concern that has garnered some discussion is the prospect of a tax increase should former VP Joe Biden win and the possible effect such an increase might have on markets. The Biden-Harris tax plan, as presently published, would increase taxes on those making over $400,000 per year. It is worth keeping in mind that there were similar concerns during the run-ups to the 1992 Clinton-Bush and 2008 Obama-McCain elections. Despite tax increases during those Democratic administrations, markets did just fine. In the eight years beginning on the day Bill Clinton was elected, the US total market index went up about 18% per year on average. And, during the eight years starting on the day Barack Obama was elected, markets rose at a 13% annualized rate. There are too many exogenous factors — most of them beyond a president’s control — to assume with any justified confidence that if candidate X wins and takes action Y, that result Z will happen in the markets. For an informative and interactive graphic that looks at economic and market performance under past and present presidents, click here. (Hover over and click on the chart for more detailed statistics for each administration.)

Related to the possibility of a tax hike, it’s also worth remembering that even if Joe Biden were to win and was inclined to pursue a tax hike immediately, the outcome of such a gambit is not a foregone conclusion. Recall that President Obama took office in 2009 with the Democrats controlling both houses with a 57-41-2 Senate majority. Despite having control of all three houses, it wasn’t until 2013 that we saw a tax hike as many Democrats were hesitant to raise taxes in the near aftermath of such a severe recession.

Lastly, on the election topic, I’ll leave you with this chart from Clearnomics, which shows the S&P 500’s performance over Democratic and Republican administrations back to 1933. The one-year lagged return numbers are the most relevant since it takes time for any administration to enact its policies. And, again, it’s worth remembering that much of market performance under any particular administration will have been mainly due to other exogenous factors like where the country was in the business cycle when a president took office, and not specifically what actions that president may have taken. 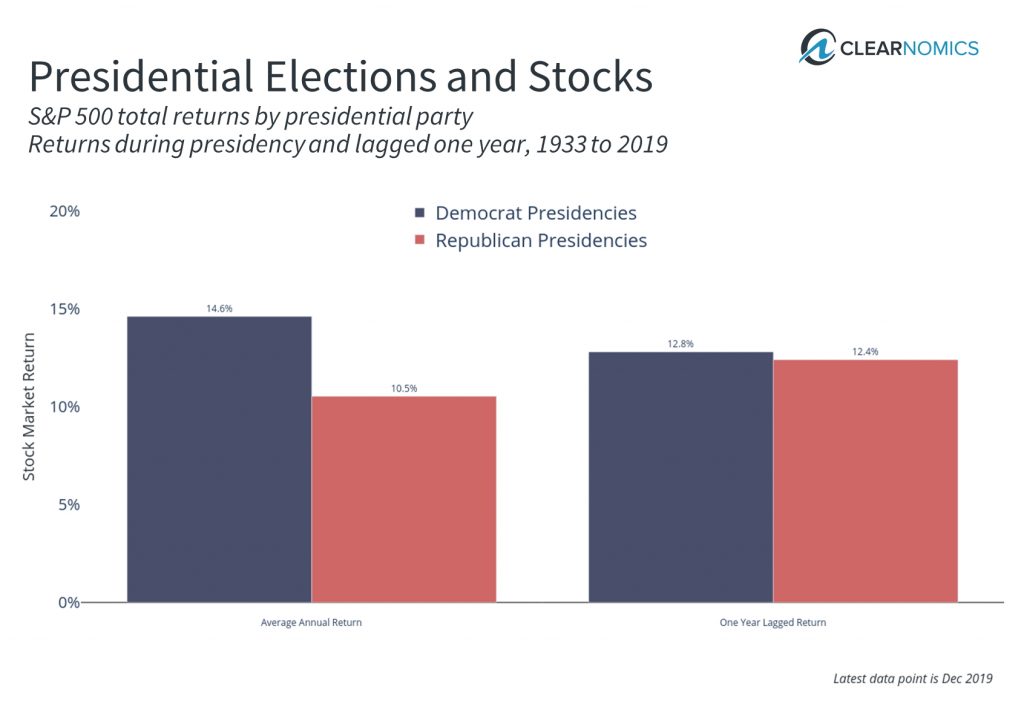 So, as we head into the final stretch of this election cycle, I think it’s fair to say that the pandemic, along with heightened economic uncertainty and an especially vitriolic political environment, have many people feeling especially unsettled. I’ll therefore offer a reminder that maintaining perspective beyond the current news cycle will always be a better guide to investment and retirement planning policy than would be rife speculation or abject pessimism, both of which are easy to succumb to as uncertainty rises and the news dins on.

I hope you are enjoying good health and making time to enjoy this spectacular, even if hot and smokey, fall we are having. As always, if there is anything we can do for you or you would like to discuss your specific situation, please don’t hesitate to reach out.

1. The 36% YTD spread between the performance of growth stocks and value stocks, as measured by the Russell 1000 Growth and Value indices, is at record levels, eclipsing even that seen during the late 90s. Additionally, the S&P 500, which has 29% of its weighting in just ten stocks, is approaching valuations not seen since early 2000.

3. In case you’re wondering how an approximately 10% quarterly drop in GDP equates to only a 32% annualized drop, not a 40% drop, this is because of reverse compounding. If each quarter’s activity falls by the same percentage, the loss in absolute terms gets smaller and smaller with each passing quarter.