If you'd like to skip the commentary and just review the quarterly market performance in charts, click here.  A link will open as a PDF in a separate window.

What a year that was! 2020 felt like an amalgamation of 1918, 1968, and 2000, with a bit of 1876 thrown in. The year started with the onset of what will likely be the second-most deadly pandemic since 19181 and ended with the most divisive election any of us have lived through. And, as if that wasn’t enough, we saw that the wounds of racial injustice are still open and painful, and there remains much to be done on that front. It was an ugly year politically and an amazing year scientifically, with Moderna developing its initial vaccine within 48 hours of receiving the SARS-CoV-2 genomic sequence. During all of this, we witnessed one of the most extraordinary market years imaginable.

In the second quarter, economic activity plummeted at an annual rate of 31%, the fastest quarterly decline since 1932, and then rebounded at a 33% annualized rate in Q3. Markets followed suit. In the five weeks after notching an all-time high on February 19th, the S&P 500 fell 34%, reaching its low point on March 23rd. The next three trading sessions saw that same index rebound more than 17% and reclaim its February highwater mark by mid-August, completing the fastest bear market onset and recovery on record. If you went to bed on February 19th and woke up on August 18th, you might be forgiven for having thought nothing interesting had happened in markets while you slept.

Nearly every major equity category posted positive returns for the full year, and most ended the year at or near an all-time high. Bonds did just as we would have hoped, providing ballast during the worst of the downturn. For the year, the Bloomberg Barclay’s U.S. Aggregate Bond index returned 7.5%, with most of that gain accruing during the downturn. Shorter-term high-quality U.S. bonds posted returns of between about 2% and 4% for the year.

However, the big market story of 2020 was the performance of U.S. large growth and technology stocks. Many of these companies, which had already been on a multi-year tear, were uniquely positioned for the COVID-induced work-from-home environment thrust upon us, and their full-year stock performances reflected that fortuitous positioning. While most other investment categories (U.S. value, international, and small caps) effectively languished through August, the tech-heavy NASDAQ soared 33% during those same months. However, that relative superiority would fade considerably in the last four months of the year as hopes rose for an effective vaccine and a return to normalcy.

If tech stocks were the biggest story of the year, the second-biggest story (and perhaps the more relevant one as we look forward) was the late-in-the-year rotation away from U.S. tech/growth stocks and the resurgence of other long-suffering investment categories, including emerging markets, international, and even U.S. value. During just the last quarter of 2020, U.S. small caps soared 31%, emerging markets shot up by 19%, and U.S. large value holdings increased by 16%. The S&P 500, meanwhile, finished up “only” 12% for the quarter. It seems like forever since anything other than U.S. growth has led the pack, but the last quarter suggests that things might be changing. If so, it’s about time. 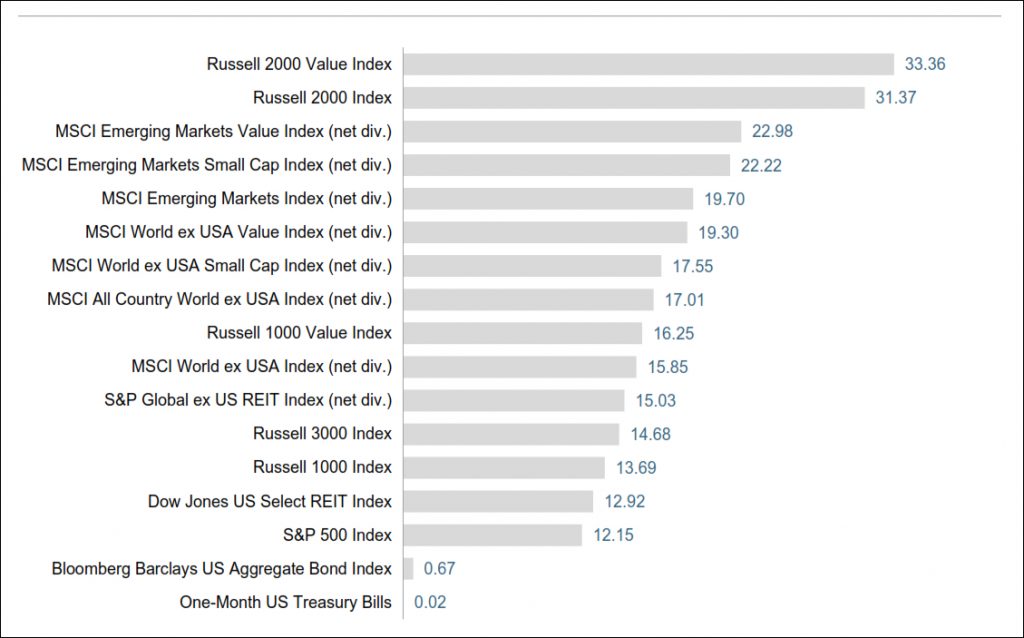 Every so often, a year comes along that offers a master class in investment principles for the long-term, goal-focused investor, which is likely everyone reading this commentary. I would suggest that 2020 was just such a year. So, what lessons might we take away from last year? I would offer the following:

So, what might the year ahead hold, economically and marketwise? I’ll first harken back to the preceding section: if 2020 taught us anything, it’s that humility is in order as predictions are often not worth the paper they are (or aren’t) printed on. That acknowledgment aside, here are a few observations about the economic and investment landscape as it looks today:

So, many of the building blocks appear to be in place for a continuing recovery as we move into 2021. This year will undoubtedly be subject to the trade-winds of global affairs and the inevitable surprises, both positive and negative, that await us. However, the baseline expectation for growth in the global economy and the companies that comprise it has historically been a good bet. This is perhaps even more so the case in the aftermath of last year’s 3.6% global contraction.

While I know that 2020 was a challenging year across the globe and that this one has gotten off to a rocky start, let us hope that a non-election year — and one with a receding pandemic as vaccinations are more widely available — will bring a better and brighter year for all of us. I wish you and those close to you a 2021 filled with much health, hope, and happiness. As always, we are grateful for the opportunity to be of service, and please let me know if there is anything we can do for you.