If you'd like to skip the commentary and just review the quarterly market performance in charts, click here.  A link will open as a PDF in a separate window.

A Strong Start to Hopefully a Better Year

The twelve-month period ending March 31st was perhaps the most globally traumatic year since World War II, yet economic activity contracted only 3.5% — much less than many projected. A year into the pandemic, we are hopefully nearing its end as we see the green shoots of normalcy emerging along with the springtime crocuses. Because I covered the market’s precipitous dip and meteoric recovery in my year-end wrap-up, I won’t repeat myself except to note that last quarter marked the one-year anniversary of the pandemic’s onset and its related lockdowns. And yet, just one year later, we sit perched near all-time market highs, with the S&P 500 closing last week above 4000 for the first time ever. Further brightening the outlook, 56 million Americans, or 21% of the population, have been fully vaccinated, with another 3 million shots being delivered daily. For many, life is starting to look and feel normal again. What a difference a year can make!

Commensurate with the brightening outlook, the first quarter saw a strong pick-up in economic activity. The Chicago Producer’s Manufacturing Index (PMI) accelerated more than expected last month, rising to 66.3 from February’s 59.5. (Anything above 50 indicates economic expansion.) The March jobs report was also a blowout, with 916,000 jobs added last month compared to expectations of 675,000. And, in news that probably no one expected a year ago, average US household net worth has surged to all-time highs as real estate prices and stock market valuations rose sharply from their pandemic lows. 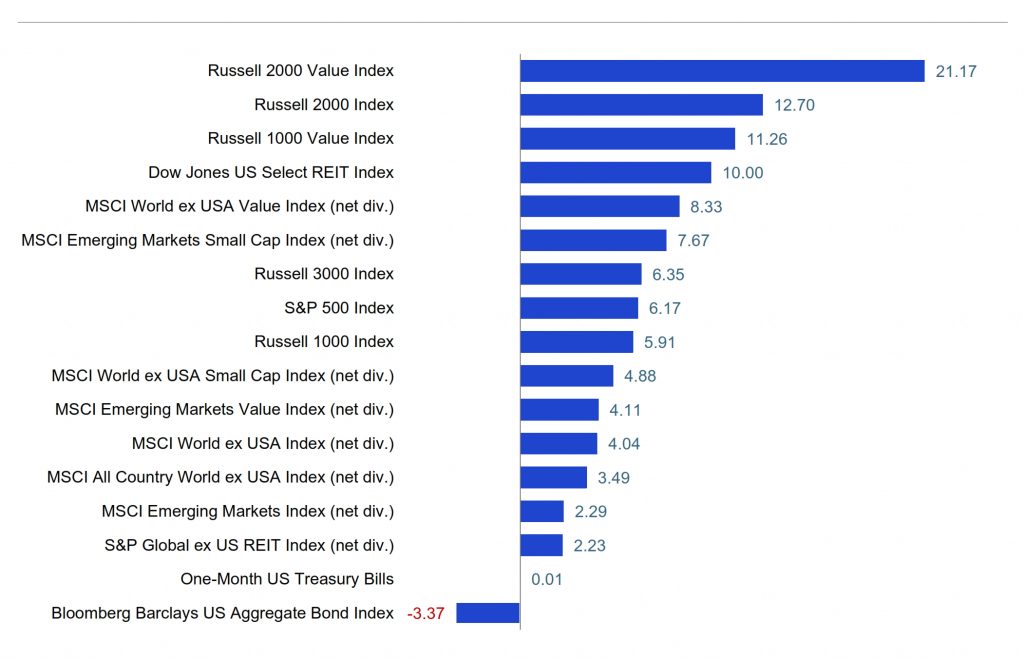 While the tech-heavy Nasdaq gained slightly less than 3%, the S&P 500 rose just over 6%. The broad international EAFE index was up 4%, although the MSCI Emerging Markets index added only 2%. The most interesting developments, however, continued to be the resurgence of the small-cap and value premiums, which up until last September had been MIA for several years. In the US large-cap space, the Russell 1000 Value index beat the Russell 1000 Growth index by 11%, and in small caps, the Russell 2000 Value index bested the Russell 2000 Growth index by 16%! Similarly, but to a lesser extent, small caps handily outperformed large caps, with the Russell 2000 small-cap index posting a return 6% higher than the Russell 1000 large-cap index. This pattern of value stocks strongly outperforming growth stocks and small companies outperforming large ones was true around the globe, although to varying degrees by region. This continued a trend that started last September.

In bond markets, returns were not as rosy, with the US aggregate bond index falling a little more than 3% on concerns about inflation and rising interest rates. Shorter-term term bonds posted near-zero, but slightly negative, returns. More on inflation and interest rates later.

Much of what happens economically this year will be determined by changes in COVID-related numbers, including infections, hospitalizations, and vaccinations. These numbers will, of course, drive activity limitations, or lack thereof, here and abroad. For evidence of this, look no further than the contrast between what’s going on in the US compared to France, Italy, and Germany. All three countries are experiencing mushrooming rates of infection and are presently in some state of partial lockdown. Vaccine availability and delivery is one likely cause of this differential; the US and the UK have been among the most effective vaccination rollouts globally, with 32% and 47%, respectively, of each country’s populations at least partially vaccinated. By contrast, France, Germany, and Italy each have only 12% to 14% of their respective populations at least partially inoculated. However, despite its slower start, Europe’s vaccine rollout appears to be gaining pace and is expected to support normalization of activity by sometime in the third quarter.

In the meantime, an accelerating pace of vaccinations in the US, the passing of last month’s $1.9 trillion American Rescue Plan, and improving prospects for an infrastructure spending bill have set high expectations for US economic growth. And, even with Europe’s slow start to its vaccine rollout and its presently high infection rate, the European post-lockdown recovery is also expected to be quite strong, with 2021 GDP growth expectations at 5% or more following last year’s nearly 7% decline.

With an economic and market recovery well underway and hopefully more good news to come as global vaccine rollouts pick up steam, what might this mean for markets? As I’ve noted in previous commentaries, the strong market performance we’ve seen over the last several months almost certainly assumes a continuation of these positive trends. So, I think it’s fair to assume that most of those expectations are already baked into stock prices. To the degree the news is better in aggregate than currently expected, markets will likely do better, and of course, the opposite is also true.

So, while deviations from the expected will likely drive markets, especially in the short term, examining relative valuations between asset classes has historically been helpful in forming expectations around how one asset class might perform relative to others over longer time frames. And, there are significant valuation disparities among asset classes. For example, US large-company growth stocks — think Nasdaq and, to a slightly lesser degree, the S&P 500 — are among the most expensive global asset classes right now, sporting valuations between 27x and 29x trailing earnings. By contrast, many other equity asset classes are trading at multiples 30% to 60% less expensive than US large-cap growth stocks. While such valuation discrepancies can persist longer than you might think, and they don’t tell us much about near-term performance, these kinds of pricing disparities have historically been a useful guide around intermediate- and longer-term return expectations. Just as we saw in early 2000, it’s possible the recent seven-month rotation out of (expensive) US large growth stocks and into (cheaper) small-cap and value companies is evidence that this kind of reversion to the mean is alive and well after all.

Of course, markets often have a way of surprising us, which is why we spread our bets.

But What About Inflation?

High growth expectations and an abundance of stimulus, especially in the US, have raised concerns about inflation, and therefore interest rates. Although pre-existing structural issues may keep a lid on inflation[1], the Federal Reserve has recently changed its approach to balancing its twin mandates of moderate inflation and full employment. Specifically, the Fed’s recently stated policy is to allow the economy to run a bit hotter for periods to target full employment while attempting to maintain an average rate of inflation of about 2%. This is a departure from the previous policy of targeting 2% on an annual basis and means that, in some years, the Fed may stand by as that year’s inflation rate overshoots the 2% target in an effort to achieve maximum employment.

This change has amplified concerns about inflation and, specifically, about whether the Fed would be able to stamp out an inflationary fire once it has started. To be fair, the Federal Reserve spent the better part of the 2010s trying to get inflation up to 2%, so it’s reasonable to question just how much control can be exerted over such things. That said, as we return to something approaching normal, it’s hard to imagine there won’t be at least some sector-specific inflation (think, travel and hospitality) as stimulus liquidity meets pent-up demand. We’ve already seen substantial inflation in housing markets and housing-related construction costs, although inflation in this domain has been primarily driven by supply and material constraints, partly borne of the pandemic.

None of this implies that there will be long-term or persistent general inflation. While anything is possible, it’s hard to really know. Yes, the threat of inflation seems very new given the low-inflation world we’ve been living in, but it’s worth remembering we’ve seen other inflation scares before that never materialized. One case in point is the grave inflationary concerns many well-informed observers voiced in 2010 and 2011 over the Fed’s then never-before-tried quantitative easing program. Despite those seemingly valid concerns, the more significant issue during that decade was weak demand, anemic growth, and low inflation. As it will likely take until at least mid-2022 for the US economy to recover its lost output (and probably longer elsewhere), many inflation watchers have suggested it would be a surprise to see any significant uptick in general inflation until at least 2023.

How About Interest Rates?

A close cousin of inflation worries is rising interest rates and the effect such increases would have on asset prices. For equities, higher interest rates are a mixed bag. Rising rates can often signal more robust growth ahead, which is usually a net positive for stocks. On the other hand, rate increases often herald diminished bond returns — at least in the short term — and increased equity volatility during the transition period between lower and higher interest rates.

Furthermore, the reasons why rates are rising (i.e., an improving economic outlook vs. monetary tightening) can make a difference in how stocks fare. For example, rates rising due to an improving economic outlook usually bodes well for future stock prices, whereas monetary tightening to tamp down inflation, less so. In that vein, it’s worth noting that bond market prices indicate the first Fed rate hike isn’t likely until late 2022, with two further hikes priced in for 2023. The Federal Reserve Open Market Committee (FOMC) said in its mid-March projection that any rate hikes were unlikely before late 2023.

More important than the specifics of the inflation and rate worries is a broader point: markets tend to price in most known information very quickly — and more often than not, well in advance of the expected worry (or opportunity) actually arriving. For example, stocks turned sharply downward starting in mid-Q1 last year, well before economic activity did likewise. Similarly, by the last week of March 2020, markets had begun to look ahead to the eventual recovery and had already turned up sharply. Last year, some market participants were too pessimistic in their outlook and others were too rosy, but on balance, the market got it mostly right. This is worth remembering as we scan the horizon for signs of inflation and/or rising interest rates. While markets can sometime seem too dour or too sanguine, it’s generally a better bet to assume they have reasonably priced in the known risks given the cards on the table. Anything beyond that is probably speculatively betting against the cards we can actually see.

So, as the weather starts to warm, here’s hoping for continued improvements, economic and otherwise, as life begins to return to something approaching its pre-pandemic normal. I hope you and yours are well. As always, please let us know if you have any questions or if there is anything we can do for you.

1. For a good discussion of why inflation has stubbornly remained so low since the Great Financial Crisis, see this paper from the St. Louis Federal Reserve. Possible contributing factors include an aging demographic, increasing technological productivity, a rise in the sharing economy, and globalization. These trends have all been decades in the making and are likely difficult ones to reverse. The low-inflation paradox has been one of the more interesting questions in modern economics.